Planning a Football Trip to Europe in Summer 2019?  The Uefa Under-19 Championship is taking place in Armenia in July this year which gives the opportunity to see some of Europe’s best young players in a country not often visited.  This post details gives details to help you plan your football trip.

The tournament will take place from 14–27 July 2019 and all the games will be played in one city, Yerevan at the Vazgen Sargsyan Republican Stadium

A total of eight teams will play in the tournament, with players born on or after 1 January 2000 eligible to participate. Starting from this season, up to five substitutions are permitted per team in each match.

The final draw will be held in spring or early summer 2019 in Armenia. The eight teams are drawn into two groups of four teams. There is no seeding, except that the hosts Armenia are assigned to position A1 in the draw.

Armenia is a nation, and former Soviet republic, in the mountainous Caucasus region between Asia and Europe. Among the earliest Christian civilizations, it’s defined by religious sites including the Greco-Roman Temple of Garni and 4th-century Etchmiadzin Cathedral, headquarters of the Armenian Church. Khor Virap Monastery is a pilgrimage site near Mount Ararat, a dormant volcano just across the border in Turkey.

Armenia is becoming an increasingly popular tourist attraction, with the small but charming nation boasting a rich history. Armenia, which was the first country to declare Christianity as its national religion, boasts some of Europe’s most stunning views, with the peak of Mount Ararat dominating the country’s skyline.

The Foreign and Commonwealth Office (FCO) advise against all travel to within 5km of the border between Armenia and Azerbaijan in the Tavush and Gegharkunik regions, and along the M16/H26 road between the towns of Ijevan and Noyemberyan. By far the largest city in Armenia, the capital Yerevan is home to the grand Republic Square, the Cascade where you can see the city’s monument to Soviet victory in the Second World War, the Armenian Genocide Memorial where you can learn more about the nation’s troubled past.  Much of what Armenia has to offer can be explored during day trips from Yerevan, which is known as the City of Cafes. Yerevan is also home to Blue Mosque, which is the only mosque in the whole of the country, as well as Levon’s Amazing Underground World, which is one of Europe’s most unusual attractions.

Lake Sevan, found in the heart of Armenia, is the country’s largest lake and a beautiful place to visit during a break in the country. The lake is surrounded by some stunning monasteries – the most impressive of them being arguably the Sevanavank Monastery.

If you’re looking for the best view of Mount Ararat, make one of your day trips from Yerevan to Khor Virap.

Garni is home to a 76 AD temple built by King Trdat I. It’s set on the edge of a gorge overlooking the Azat River, and it attracts hundreds of visitors each year.

Geghard Monastery is a World Heritage Site carved out of the rock face at the Azat River Gorge. Built in the 13th century, it’s the most accessible monastery from Yerevan and makes for a fascinating day trip.

The stadium was built between 1933 and 1935. It was officially opened in 1935 as Dinamo Stadium. It is currently used for football matches and is the home ground of the Armenian national team as well as the local football club Ulisses FC of the Armenian Premier League. 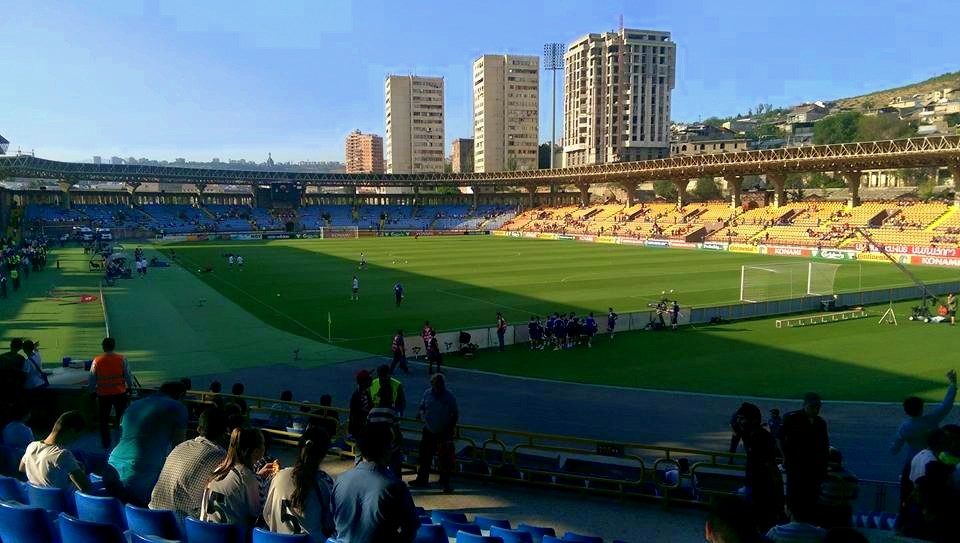