Planning a Football Trip to Germany – DFB Pokal Round 16

Planning a Football Trip to Germany.  This post has details of the DFB Pokal which takes place on the 4th and 5th February.

The draw for the 2019-20 DFB Pokal Round of 16 has served up some enticing matchups and will see eight of the eleven Bundesliga sides face off against each other.

Eintracht Frankfurt host RB Leipzig and FC Bayern will host TSG Hoffenheim at the Allianz Arena.  Hertha Berlin will travel to Gelsenkirchen to face Schalke 04.  The final all-Bundesliga tie features a rematch of last season’s round of 16, as Werder Bremen take on Borussia Dortmund at the Weserstadion.

Elsewhere, Bayer 04 Leverkusen host VfB Stuttgart, who are sitting third in the 2. Bundesliga and are aiming to get back into the top flight. Union Berlin, who beat SC Freiburg in the previous round (and also in the Bundesliga a week before), will travel to SC Verl, one of the two remaining Regionalliga sides in the tournament. The other amateur side, FC Saarbrucken, will host SC Karlsruhe in the round’s only all-lower-tier matchup. Both Regionalliga sides had to get past an upper-tier competition to reach the round of 16. Verl defeated Holstein Kiel on penalties while Saarbrucken defeated FC Köln, which was one of the biggest upsets of the tournament so far. Finally, FC Kaiserslautern, the 3. Liga’s sole remaining representative will face Fortuna Dusseldorf in the coveted Fritz Walter Stadion. 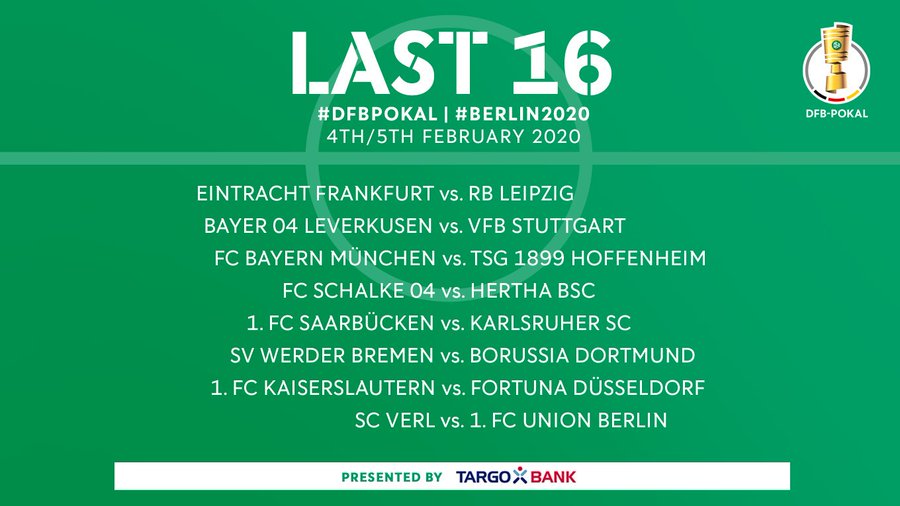