This post helps you plan football trips to the 3 news stadiums that will have their first matches in the 2020 MLS season.

3 MLS teams will be playing at new stadiums in 2020 so Ground Hoppers have an opportunity to visit 3 new grounds.

On Nissan Stadium’s eastern side is the Titans Pro Shop, a retail store which sells team merchandise. It remains open year-round and maintains an exterior entrance for use on non-event dates.

Construction of the Major League Soccer stadium, where Nashville SC will play, is on hold after Mayor John Cooper took office and did not sign the demolition contract to get the project underway. 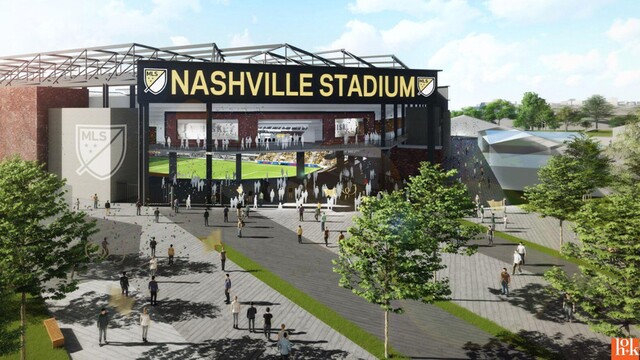 The plan is for Nashville SC to kick off at Nissan Stadium until their new stadium is built, with their first match as an MLS team scheduled for this upcoming February against Atlanta, but the details of the future of the MLS stadium are currently unclear.

Inter Miami CF will transform Fort Lauderdale’s Lockhart site into its permanent training complex with the addition of an 18,000-capacity stadium. The community will gain access to over 30 acres of green space to include proposed amenities such as youth soccer fields, a park and a community center when the project is complete. Inter Miami plans to launch its first two MLS seasons in Fort Lauderdale. The Lockhart site will remain the permanent training complex for the Clubs’ teams, including its youth Academy when Miami Freedom Park opens.

The ultimate goal is to move to their brand new purpose-built 25,000 seater stadium at the Melreese golf course site near Miami Airport, but it won’t be ready until 2022. 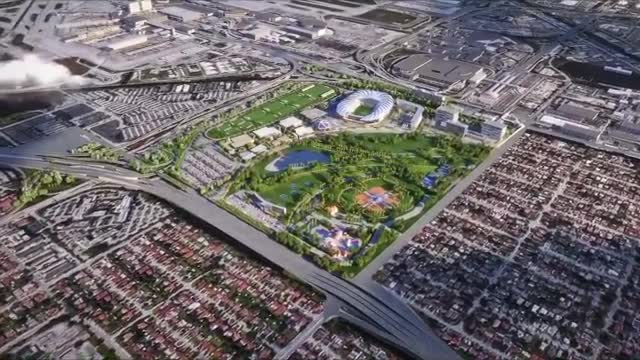 Lockhart Stadium was once the home of the Fort Lauderdale Strikers but had fallen into a state of disrepair since they moved out fully in 2016.  It was also home of the ill-fated MLS franchise Miami Fusion between 1998 and 2001.

Soldier Field, formerly called (1924–25) Grant Park Municipal Stadium, stadium in Chicago that was built in 1924 and is one of the oldest arenas in the NFL, home to the the city’s professional gridiron football team, the Bears, since 1971. 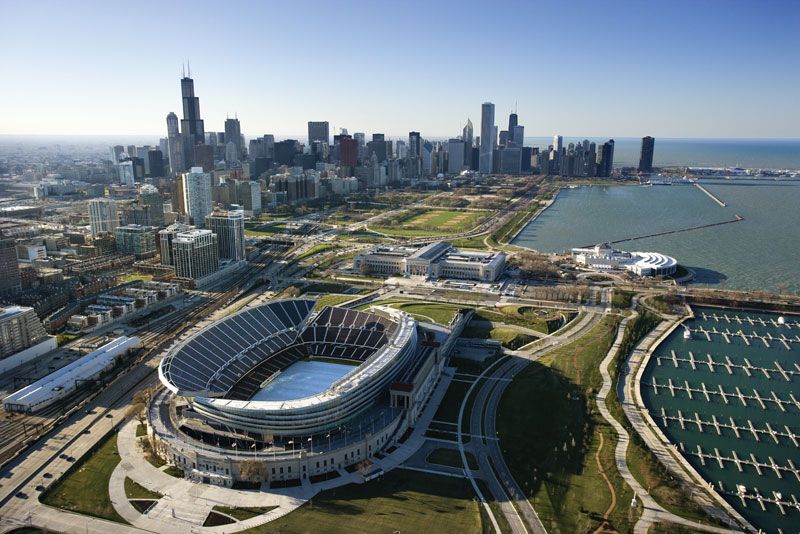 In 1919 the South Park Commission (later reorganized as the Chicago Park District) held a design competition for what supporters hoped would be “the largest, most beautiful public arena in the world.” In addition, the stadium would also honour the city’s World War I veterans. Architects William Holabird and Martin Roche won with a design for a Greek Revival stadium that notably featured a pair of colonnades. In 1922 construction began along Lake Michigan and continued for more than a decade. Although it had been envisioned to seat 150,000 people, the stadium featured approximately 74,000 permanent seats, with temporary seating for 30,000.

On October 9, 1924, the multipurpose Grant Park Municipal Stadium, as it was then known, hosted its first event: an athletic meet for police officers. An estimated 90,000 spectators saw such events as motorcycle polo. The following month, the stadium held its first football game, a collegiate match in which Notre Dame defeated Northwestern, 13–6. In 1925 the stadium was renamed Soldier Field, and on November 27, 1926, it was officially dedicated during “one of the greatest football games ever played,” a 21–21 tie between Army and Navy.

Over the ensuing decades, Soldier Field hosted a number of memorable events. In 1927 the stadium was the site of a controversial rematch between boxers Jack Dempsey and Gene Tunney that became known as the “Battle of the Long Count.” After knocking down Tunney, Dempsey initially failed to go to a neutral corner, thus delaying the start of the count and allowing Tunney to recover and eventually win a 10-round decision. In 1944 Pres. Franklin D. Roosevelt delivered a speech that was attended by a reported 150,000 people, and a decade later Soldier Field drew some 260,000 Catholics who were celebrating the Marian year, which honoured the Virgin Mary. In 1968 the stadium hosted the first Special Olympics.

However, Soldier Field was most closely associated with the Chicago Bears. The team had played at Wrigley Field for more than 50 years before deciding on a new venue. After some consideration, the Bears opted to return to Soldier Field, where they had played a game in 1926. The stadium became the team’s home beginning with the 1971 season. In order to offer fans a better view, seats were moved closer to the field, lowering the stadium capacity to nearly 57,000. In 1978 a renovation plan began that included the addition of nearly 10,000 seats.

Despite such changes, there were continued calls for more extensive updates, and at various points the owners of the Bears threatened to move the team out of the city. In 2001 local and state authorities—including the Chicago Park Distict, which still owned the stadium—agreed to a renovation plan that replaced most of the arena, except for its neoclassical shelf, including the colonnades. Work began the following year, and the Bears played at the University of Illinois’ Memorial Stadium during the 2002 season. Construction was completed in 2003—at a cost of some $690 million—and the resulting stadium proved controversial, with much of the criticism directed at the modern seating bowl, which some compared to a spaceship. Another point of contention was the capacity. The number of seats dropped to 61,500, which failed to meet the NFL’s requirement of 70,000 to host a Super Bowl. The renovation was also notable for causing the stadium to lose its National Historic Landmark status in 2006.